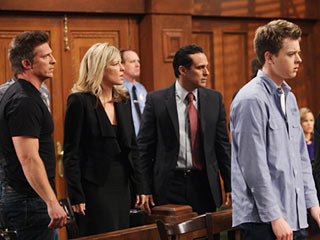 Congrats on your new job as head writer of General Hospital. It's no doubt well deserved, given the years that you have toiled in the trenches underneath Bob Guza.  I'm taking your promotion as a sign that ABC has high hopes for GH now that they've tossed the mighty legacy of Agnes Nixon (All My Children and One Life to Live) on the trash heap.

I know it's going to be awhile before you stories air, but might I make a few suggestions as to how you can save this show from suffering the same fate as its sisters? First of all, forget market research, and listen to what the fans want.  It's not hard to do. I suggest that you read what Mallory has been writing about GH over at Serial Drama for the past few years, and I'm sure that Jamie Giddens over at Daytime Confidential could help out as well. Don't forget Carolyn Hinsey at Soap Opera Digest who hit the nail on the head when she said that viewers don't want stories driven by arbitrary events that might boost ratings for 5 seconds but have no lasting effect.  We want character driven stories, not plot driven stories. Of course to make this work, some deadwood has to be trimmed from the cast.  Lisa Niles, Matt Hunter, Spinelli, Clare Walsh, Siobhan (also known as irritating Irish chick who serves no purpose), Abby, Brenda (whose return was totally botched by your predecessor), Johnny and Anthony Zacchara all need to hit the road in the next few months.

Recently my friend Mala and I sat down over the weekend and played Head Writer. Here are just some of the ideas that I came up with (you can read Mala's ideas here). I totally agree with her about a Lucky/Maxie/Liz triangle, it plays to the character's history and it makes sense that Lucky would turn to Maxie, especially if he's contemplating doing drugs again. Siobhan can't compete with that kind of history and frankly she's been written as nothing more than just feisty since she's been on the canvas.

1) Bring back Bobbie from under whatever rock she's been hiding under over the past several years. Carly needs her, as do Luke, Lucky and Lulu.  Find out why she's missed every significant moment in her daughter's life over the past few years, and why she wasn't there for Luke's intervention. Have her help Carly deal with yet another failed marriage. Also give her a job as Head OR nurse or head of the nursing program in general at GH. She finds herself falling for her old love Scott Baldwin who has returned to town with his daughter Serena, who immediately makes a bee-line for Michael Corinthos. Seems she likes to take a walk on the wild side of life.

2) Mala mentioned having Jason Morgan recover his memories.  Bring back either Lainey or Tom Hardy Jr. as head of psychiatry to help Jason deal with the fact that he's killed people for the past 16 years.  Tracy would now feel threatened, wanting Ned and Dillon to come back into the fold at ELQ. Perhaps, if they don't want to come back, she reaches out to JR Chandler and a merger between Chandler Electronics and ELQ which would bring JR and little Adam to Port Charles. JR finds himself drawn to Sam McCall even though she's engaged to Jason Morgan Quartermaine. This would bring the Quartermaines back to the forefront which is what fans have been clamoring for. Perhaps add a little corporate espionage to the mix. While you are at it, why not have Edward start courting Leslie Webber, finding love again in his twilight years. Take a look at the fan reaction to Victor Kiriakis and Maggie Horton over at DOL. Fans are open to love amongst all ages.

3) Now that Jason has taken his rightful place as the Quartermaine heir, where does that leave Sam? How does a con artist/detective/mob moll fit in to his new high sociey world? Especially when Kelly Cramer comes to town to take over the Port Charles newspaper. Sam breaks up with Jason and decided to find out who her father is which sends both Helena Cassadine and Alexis into a tizzy. Valentine Cassadine arrives in Port Charles and immediately moves into Windermere along with his new wife Holly Sutton. Is he Sam's father or is the truth even darker than she realizes? While Helena Cassadine tries to neutralize Sam finding out who her real father is, she also finds time to try and romance both Dr. David Hayward and Edward Quartermaine.

4) Dr. David Hayward arrives in Port Charles and takes over as head of cardiac surgery which puts him into conflict with Dr. Monica Quartermaine who is not ready to be put out to pasture. The two butt heads over surgeries and procedures. He immediately makes an ally of Carly Roberts Quartermaine Corinthos Jax who now has a seat on the hospital board thanks to her divorce from Jax.  Of course they hit the sheets, becoming Port Charles's new power couple. Hayward also clashes with Patrick Drake over who has the bigger cojones as a doctor. Despite the fact that he was once Robin's stepfather when he was married to her mother Anna, Hayward and Robin also clash over her research. Remember David Hayward loves to mess with drugs (Libidizone anyone?).  Who knows what he could create and release into the punch bowl at say the nurse's ball?

5) If Robin didn't have enough of a headache with her former stepfather back in town, her uncle deciding to quit the police force, Bianca Montgomery comes to town and reveals exactly what Robin was doing all those years in Paris.  Bianca comes to town to make a business deal with Jasper Jax. Fusion needs a serious influx of cash and Jax is one of the few venture capitalists who has money to invest. Sonny also wants to invest so that he can launder some cash in a desperate attemp to go clean to try and get Brenda back. While in town, Bianca connects with her old friend Robin. It turns out that the women were more than friends for awhile until Robin decided that she really prefers men, but seeing Bianca again stirs up old feelings which causes Patrick to once again feel insecure and to have problems controlling his jealously.

6) Mac decides to retire as police commissioner, disallusioned by the force's inability to end organized crime in the city. He takes a job as head of security at the MetroCourt where Max and Milo now work since Sonny has decided to go straight. Frisco Jones, after years of working for the WSB, finally comes back to town, on a mission to find out what Helena and Valentine Cassadine are up to. He also needs to deal with one angry daughter, Maxie Jones, who tears into him for his years of neglect, and for not even coming back for her sister Georgie's funeral. Maxie finally deals with her daddy issues. While working at the Metrocourt he runs into Kate Howard, who decides to make Mac her new pet project.

7) Lucas Jones comes back to town and gets a job at General Hospital as a physical therapist. He reconnects with his cousin Maxie, commiserating over the death of Georgie. He also connects with his big sister Carly. When Milo needs physical therapy to cope with an older injury, he finds himself attracted to a guy for the first time in his life. But Milo is not the only one in town who has is eye on the handsome new employee at GH.

8) Ethan and Kristina impulsively get married after he receives his cut of the Quartermaine money but he finds himself feeling left out when Kristina starts attending Port Charles University, along side Dillon Quartermaine who has returned to Port Charles. He keenly feels his lack of education compared to Kristina but doesn't know what to do about it.  Kristina assures him that she loves him exactly the way that he is, but he worries that he can't compete with the Taylor's and Dillon's of the world. The only way he thinks he can compete is by having money. He gets involved in a series of underground high stakes poker games. Initially he wins several but then he gets into deep.
Posted by Elizabeth Kerri Mahon at 5:21 PM

I would LOVE this show. Let just a few of these ideas sink in . . . please!

If Wolf can bring the show back to its roots, which is General Hospital and not Sopranolite, the show would be awesome and the ratings would rise.

Elizabeth Kerri Mahon
An intriguing look at the post-modern women who are redefining what it means to be Royal. Have any requests? Email me at scandalouswoman at gmail dot com.